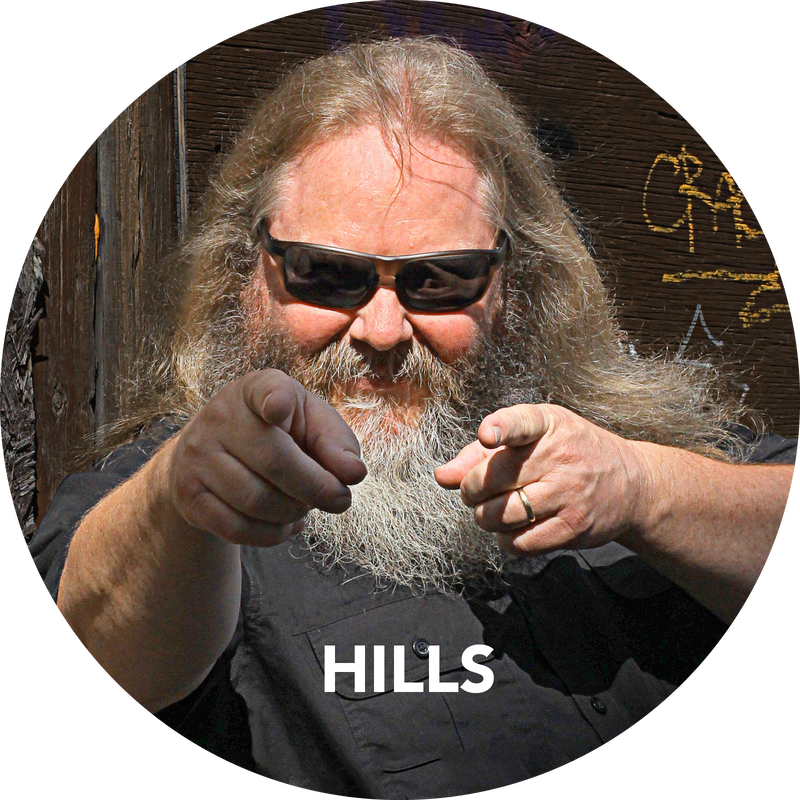 HILLS WALTER - LEAD VOCALIST​
​Hills has been singing since the age of 7. He gave his first radio performance in Cambridge, Ontario at an Anglican church when he sang in Eric Dudney’s choir. Hills went on to perform with the Waterloo Oxford Jazz Choir at the Canadian Jazz Finals in 1983. Around this time Hills got involved with his first rock band while in high school.
Hills went on to tour with his first professional band at the age of 19. He then spent 20 years rocking clubs all over Canada with numerous acts. While working as a studio vocalist Hills became interested in the blues when he was recording on a project called Skeeks and The Jazz Jam. Later on, he joined forces with the writer of the Jazz Jam material, Riley Waters. Riley and Hills went on to record three CDs as the Jamblasters. During the recording of the 2010 Swampland CD, Hills brought Walter Horn in as a session guitarist. This brought Hills into the current band FOG!
From jazz to funk, rock and blues, Hills has proven his vocals can cover every genre. He has shared the stage with the likes of Dutch Mason, Garrett Mason, Brent and Brian Doerner, Paul Des Lauriers, Greg Dechert and Cheryl Lescom! Now, as FOG’s kind and charismatic frontman, he continues to entertain audiences far and wide. 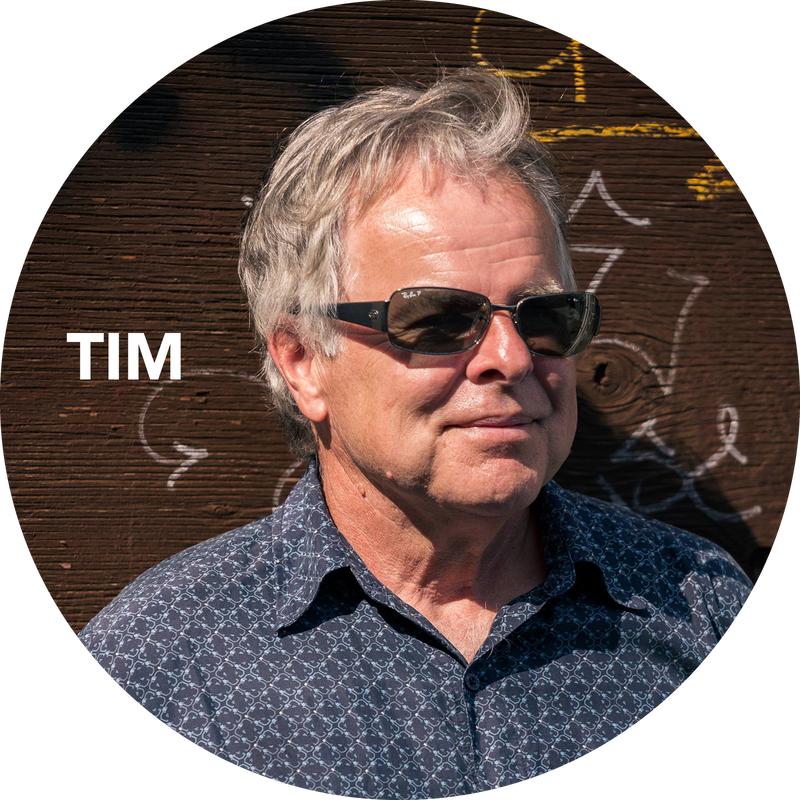 TIM PALSER - GUITARIST
Tim is a quiet legend on the music scene. While he avoids the spotlight, his guitar playing takes second place to no one. He lives off the grid, doesn’t talk much, and screams in Russian in his sleep. Quite frankly, we don’t know much about him, and you’re better off not asking.Points we do know…Tim has been playing for 45 years and some of the bands Tim has worked with, prior to FOG, ​are Robert E. Lee and Silverado. ​Tim is also in a band (with no title) in which he works with Roly Greenway of Crowbar fame. 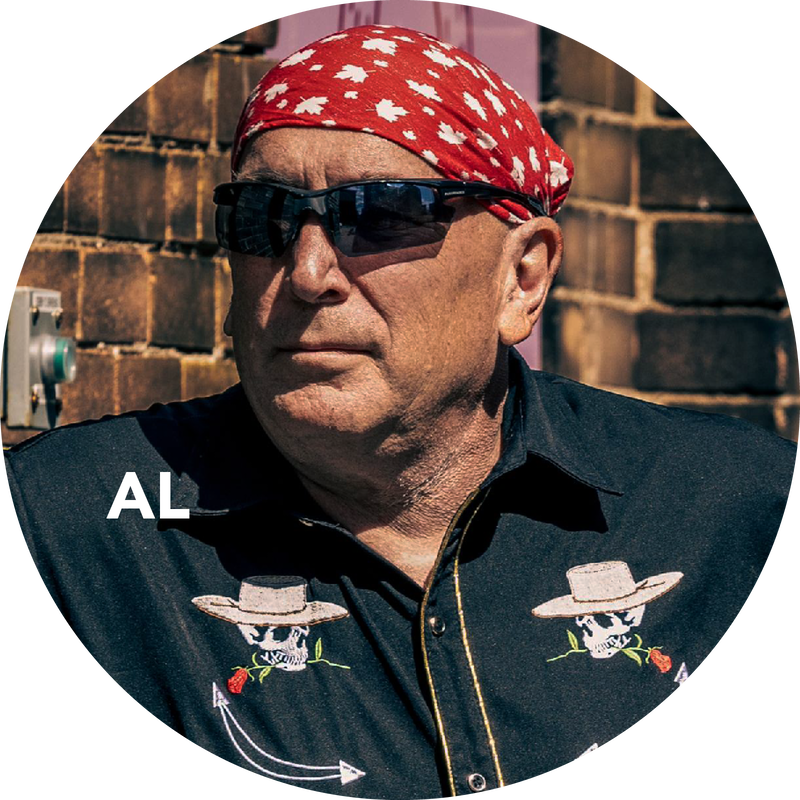 AL HOSACK - BASS GUITARIST
Drawn to music at the early age of 12, Al picked up guitar, but soon switched to bass. There seemed to be a shortage of bass players at that time. Lucky for us! His beginnings involved playing in various high school bands in the early years, then progressed to touring Ontario for 3 years with over 600 dates with the band Crossfire, and with Cheryl Lescom. Following this, he played with Pocket Weasels locally, as well as Fallen Angels, featuring former members of Bad Company, Uriah Heep, Klaatu and The Dave Gilmour Band. His past credits include playing with Nimbus 9 productions (Alice Cooper, The Guess Who), and Juno and Casby winner Michael Jordana and the Poles. He is known to say,“Performance in our era has gone the way of the silent movie star,” but if you see him play bass with FOG, you may disagree! Al enjoys the dedication it takes to make a good band sound great. 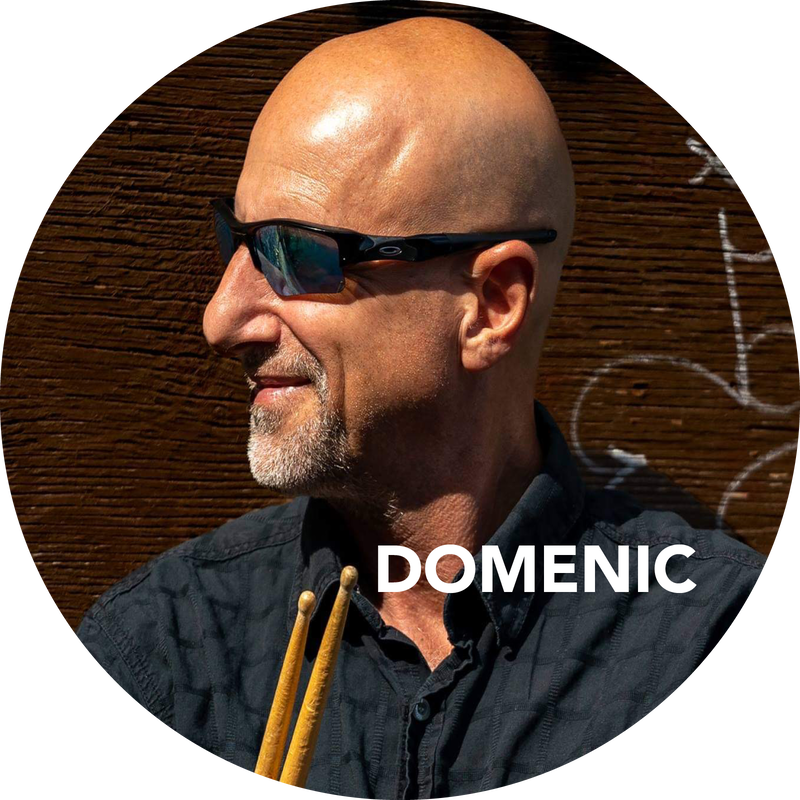 DOMENIC DI NINO - DRUMMER
Domenic has over 40 years of experience playing drums & percussion in various styles of music with a variety of groups. He has toured Eastern Canada, played the club circuits and theatres across Southern Ontario and has recorded with two Juno nominated artists. His early studies began with the Royal Conservatory of Music then moving on to The Ontario College of Percussion and eventually with Humber College. His love for music and drumming started at an early age and he continues this life long pursuit. Domenic Di Nino 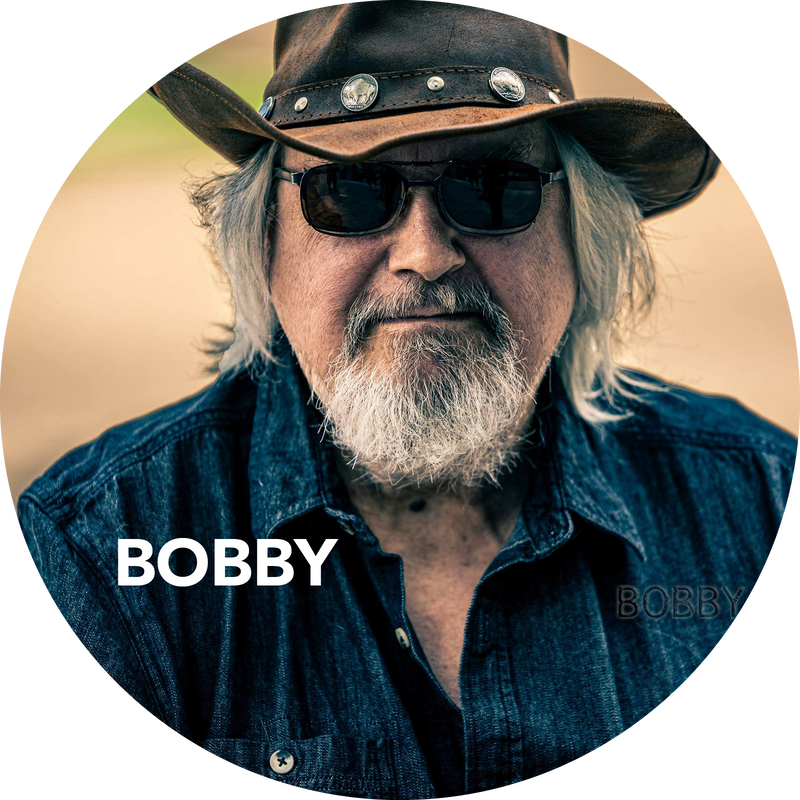 BOBBY BECKER - KEYBOARDIST
Bobby, the band’s other sex symbol, has been playing keyboards since the age of 9. His first band was
​The Rembrandts which began while Bobby was in high school. The Rembrandts were the first band recorded on Canadian Band Stand in 1967. Bobby was also a founding member of Yukon which went on to be the first Kitchener based band to land an American record deal. Sussex Records added Yukon to their label, which included Bill Withers, Jim Gould and Gallery. All acts were recorded in Detroit under the wing of Dennis Coffey and Mike Theodore. Dennis Coffey was a member of the Funk Brothers studio band. The Funk Brothers were the studio band that did all the music for Motown artists. Yukon’s song “Understanding Is Sorrow” reached #73 on the Billboard hot 100 in the summer of 1971.
Bobby also toured Canada in the mid 80s with Carol Johns and Special Delivery. Bobby went on to become a founding member of one of the best ever tributes to Bob Seger called Katmandu, who still plays shows successfully. Other bands Bobby has performed with include The Press, Spring Fever, Red Zeppelin (Zeppelin tribute) and Total Eclipse. Bobby adds his veteran touch to FOG on piano, organ and vocal lines. 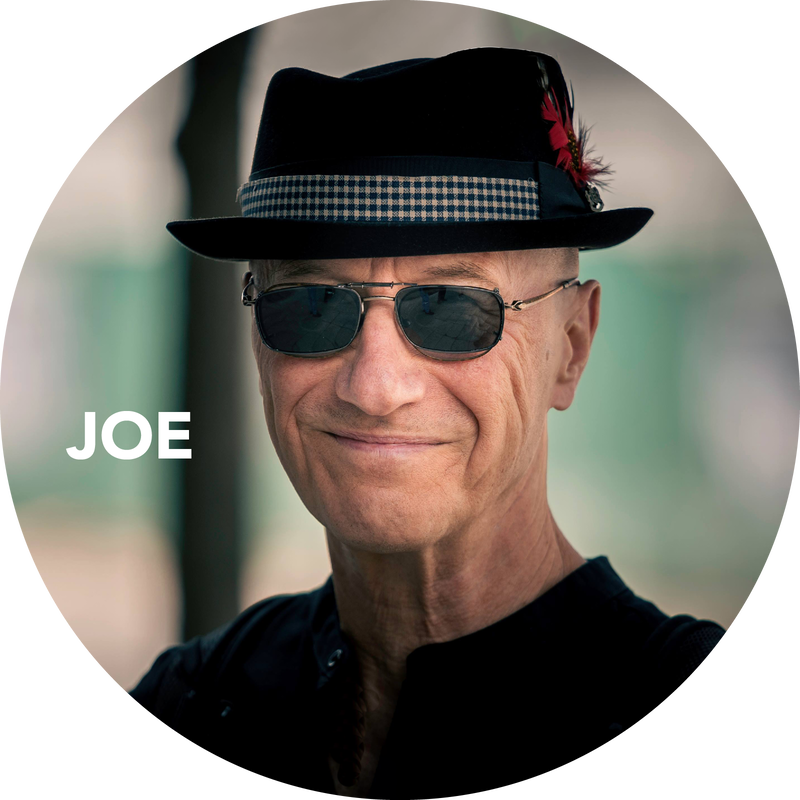 JOE DUBLANSKI - ALTO SAXOPHONE
Joe grew up in Cowansville, Quebec. In grade school, Joe sang for 4 years in a boy’s choir. He also played violin and clarinet in a polka band. While in high school, he learned to play the saxophone and joined his teacher’s big band ensemble. He also played with various rock bands influenced by Jethro Tull, Van Morrison and Santana. At 21 Joe moved to Montreal to attend the Dawson College music program. There he met his future bandmates who formed the band Calendar, a versatile 8 piece band playing classic rock, funk, R&B and the very lucrative Disco, travelling for 2 years across Quebec, the Maritimes, Nfld, Labrador and to Toronto. Fast track to 1992, living in KWC, Joe rebooted his musical chops. He co-founded the group Working Stiffs and over the decades joined many local groups including Trolley Plus One, One Bald Tire, Critical Condition and notably, Matt Storch and the Usual Suspects. Since then he has shared the stage with many local greats such as John Lee, John McKinley, David Rodenburg, Shawn Kellerman, Douglas Watson, Mike McDonald, and Peter Temple, just to name a few. Presently he is playing in the Darrel & Joe Duo, Billy Joel and the Piano Men and FOG Blues & Brass Band. He continues a lifelong quest to seek out the best riffs, the best songs and the best musicians with which to create magic on stage. 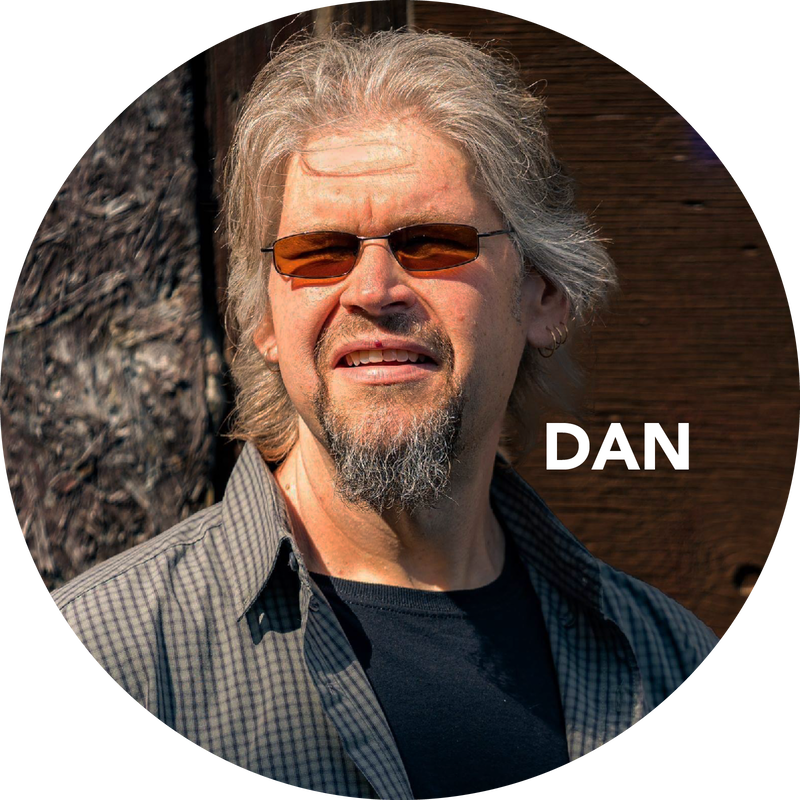 DAN JANCAR - TENOR SAXOPHONE
Dan started playing clarinet in grade 6 and got to play the sax in grade 7. He went to a performing arts high school and was mentored by Larry Bodner, formerly of Downchild, Lighthouse, Muddy Waters and UB40. Dan’s first Concert was Elton John. Sir Elton opened his show with “Funeral For a Friend/Love Lies Bleeding” and he was hooked! He knew he wanted to be a musician after that. Then he heard Bruce Springsteen and the Big Man’s sax that sounded like it was on fire!... the rest is history.
Dan has played with members of Manteca, Bowfire, Goddo, Aaron Solomon (Shania Twain, Jeff Healy, Big Sugar), cover bands and original bands, and of course, FOG! His influences include but are not limited to... Clarence Clemons, Lenny Pickett, Tower of Power, Trombone Shorty, Elton John, Prince, John Coltrane, Wayne Shorter, Charlie Parker, Chicago, and Steely Dan.
Dan’s motto is evident daily: Be humble, kind and respectful in life...be a monster on stage!
Band photos by Jimmy Gribbon
Photo of Hills by Tracy